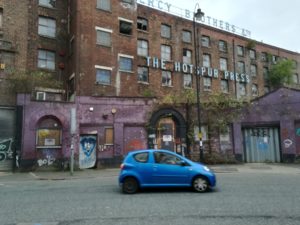 Percy Brothers Manchester, The Hotspur Press in its present state of neglect

Read all about Percy’s in The Mill

The Mill is an excellent email based newsletter all about Manchester with really interesting and well written articles on what’s happening now and in the past. Recently Dani wrote an a piece on The Hotspur Press – Read it Here.

An old apprentice gets in touch

The following has been kindly sent by Tony Whitehead, an apprentice stereotyper at Percy’s from a long long time ago!

I was an apprentice there from 1951 when I went into the  RAF. Albert’s deputy was a lovely chap called Harold Perks. A chap called Charlie Clarke, the only blind compositor in the North had a lot to do with the social club. He did the Opera House Bill on the floor with 8in. Wooden type letters, he even had difficulty seeing that. I’m pleased to say my last 30 years was spent on The Guardian.

When I was there in the 50s the head stereotype was called Fraser. The apprentices spent hours down there positioning the Thriller Comics. We spent a lot of time watching the rats on the  banks of the Irwell.

Tony – I think we may have to disagree with you slightly as regards Harold Perks!

Read all about the Hotspur Press Great Milk Machine Robbery!

You may have passed Percy Brothers iconic building on the bus, in a taxi or car or even on your bike. You may have also idly wondered what used to go on there now that it’s obviously neglected and abandoned.

I worked there for over 5 years from 16 to 21, my most dangerous years  Let me tell you about some of the fascinating people I worked with and some of the events which are now barely believable  Some names may be changed to protect the guilty but I assure you everything I write will have more than a grain of truth…

My parents had sent me to a prep school as they knew that the Catholic school primary class of 54 pupils meant the odds were stacked against me for gaining any worthwhile profession. From there I passed my 11+ and went to a grammar school. Unfortunately, due to a number of circumstances, (mainly going to blues clubs in Manchester) I failed miserably in my exams and it was decided at least I could join the family trade of printing. My five years at The Hotspur Press turned me from an overly sensitive callow youth into someone who could trade insults with the best. It helped me develop a thicker skin than I could have possibly imagined. The chip I had on my shoulder was chiselled away gradually by events and people who I still remember to this day. Percy Brothers sometimes resembled the fun house at Blackpool – there was nothing and nobody who couldn’t and didn’t end up the butt of a joke.

If any of the people who were there read this, I am sure they would agree that Percy Brothers, The Hotspur Press was a brilliant place to work in its heyday because the companionship was amazing. The purpose of this blog is to preserve some of those events and people who turned me into a man before the building is flattened, the steelworks and cranes are erected and it becomes yet another historic building in Manchester turned into pension pot for someone living in a far away country. 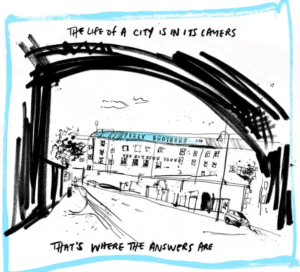 Drawing of Percy Brothers, The Hotspur Press by Ben Tallon

Click the drawing to discover more about Ben Tallon